Getting Started with the HoloPlay Unity Plugin

Getting Started with the HoloPlay Unity Plugin

Using the HoloPlay Plugin for Unity is a very seamless way to add onto your existing Unity development workflow, whether you're an expert or a beginner.

Set your Looking Glass Display to Desktop Mode and import the HoloPlay Plugin for Unity into a New Project in Unity by either double clicking on the package in your downloads folder or importing the asset within Unity via Assets > Import Package > Custom Package.

That's it! you're ready to get started! Go ahead and click that awesome button and get started on your holographic journey!

Let's open up the first example scene in the package "Framing Content with HoloPlay". This is an example demo scene with a really cute Island with two cute furry creatures (hamsters?).

Navigate to the HoloPlay Capture in the Hierarchy and then select toggle preview (or ctrl E) in the Inspector to view your scene in the capture box in your connected Looking Glass display. 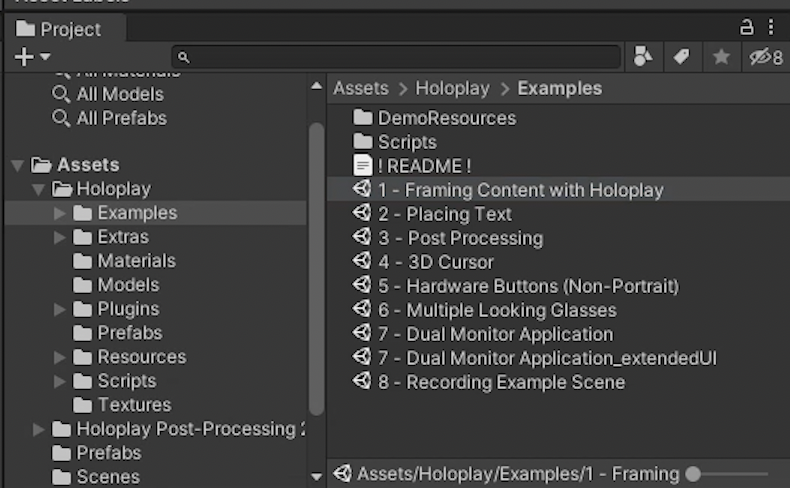 Let's go over a few basics:

The HoloPlay Capture camera is pretty similar to the unity standard camera, but there are a few things are different.

Namely, it's a box. The pink square in the front center of this box is the point of focus in the Capture Box and thus the connected Looking Glass Display.

If we move the capture box back and forth, you can see wherever the square is becomes the most clear focal point in the scene.

Select the DEMO object in the example scene's hierarchy. Let's check out the cool script that, in play mode, allows you to see animations of position, scale rotation, clipping plane, and FOV of the HoloPlay Capture camera. Hit play and go through each selection to see what changing each does for your Looking Glass view.

While this DemoCaptureAnimator script is an example of ways you can animate these values in script, you don't have to do that. In Advanced Camera Settings on the HoloPlay Capture, you can change these settings manually.

Go to the prefabs folder of the HoloPlay Plugin and add the 3d Cursor prefab to your scene. The 3d cursor is a great component that allows you to easily maneuver your scene.

Once you've got the 3d cursor added, go to the HoloPlay Capture and Add Component → OrbitControl to your camera.

Now that you've got the 3d cursor setup you can try it out in play mode with the following controls!

Pull in your own models into the scene and interact with them with the 3D Cursor and Orbit Controls.

5. Recording your scene with HoloPlay Recorder

I made all of these amazing 3D scenes in Unity, you ask, but how to I pull them into HoloPlay Studio? You can quilt record your scenes to capture them as holograms to share!

Keep the presets at default. Though the HoloPlay Recorder is now a component on the Capture camera, we still need to create a controller for it in the scene so that you can Play, Pause, Unpause, and Stop the recording how you'd like.

Here's a simple script we made that maps the HoloPlay Recorder functions to keys 1-4. You can create an empty GameObject (we named ours Recorder) and add the script below as a component to it.

Feel free to copy and paste:

Drag the HoloPlay Capture from the Hierarchy into the Recorder field to reference HoloPlay Recorder.

Now you can record a quilt, that will by default save to your general Project folder.

Something to note: as you record quilts, change the Output name field on the HoloPlay Recorder component of the HoloPlay Capture. If you don't change the name or move the saved quilt from the project folder, new recorded quilts with the same name will overwrite each other.

We're always excited to see what you're making!

If you have any questions, please reach out to us! You can reach the team at Looking Glass Factory at [email protected]! Share with us your first quilt recording in Unity, either in the Discord, or by tweeting and tagging @lkgglass